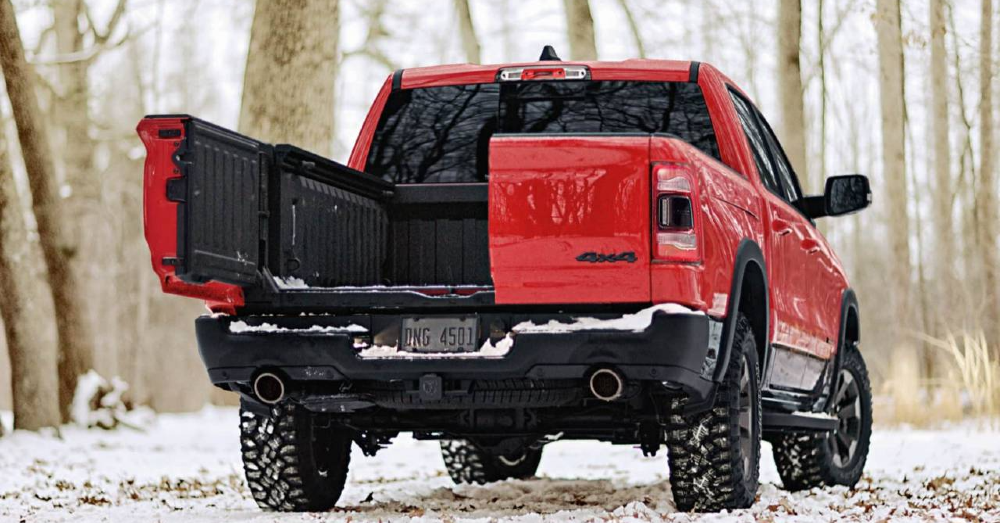 Previous spy shots gave us a look at a new Ram 1500 pickup truck that had the front and the rear covered in camouflage but not the cabin area.

With two-thirds of the truck covered we had the idea that the new 2019 Ram 1500 would give us a fancy tailgate, some impressive hood architecture, or an entirely new look in the front and rear of the truck. More recently, new spy shots were captured to give us a better idea of what Ram has up its sleeve to give us the look and the features we want.

A Response to GMC

GMC brought us the first MultiPro tailgate for the GMC Sierra Denali and this new tailgate allowed the GMC team to feel a bit boastful about what they had created. With the Los AngelesRam in the Super Bowl, the fodder was set for GMC to head to twitter and make a statement about Ram already losing before the kickoff took place. Of course, Ram fired back with a flag on the play and told us to wait until the opening of the Chicago Auto Show in which we will see what the Ram team has created.

The Spy Shots Don’t Tell All

When we dissect the spy shots of the Ram 1500 on the road, the set that was taken most recently, all we can surmise is the fact that there is to be a secret or two in the rear of the truck. Ram has already given us the RamBox storage systems on the sides of the truck, which doesn’t leave many places for them to offer something different that we’re going to choose to enjoy and admire every day. However, there is another hint that Ram has a trick tailgate on the way.

The Family Support for Ram

Ram is part of the FCA team and FCA offers a large number of vehicles outside the US that we don’t see or get to enjoy on a regular basis. One such vehicle is the Fiat Toro which is a pickup truck that’s small and useful while also offering a split tailgate. In fact, this split tailgate has been on the Toro for a couple of years and now it seems a similar tailgate could be on the way to the rear of the Ram 1500 that we’ll see on the state in Chicago.

The Solution Awaits Us

When the Chicago Auto Show arrives, we’ll have the answers we’ve been looking for when it comes to the new Ram 1500. It’s possible that Ram could add more useful storage under the bed, similar to what Honda offers in the Ridgeline. That doesn’t seem likely considering they threw the proverbial flag on the GMC play with their new tailgate. Once we receive our answers, we’ll know what the new Ram has in store for us so that we can have the qualities we’re looking for in a fantastic truck that gives you the drive you’re looking for.