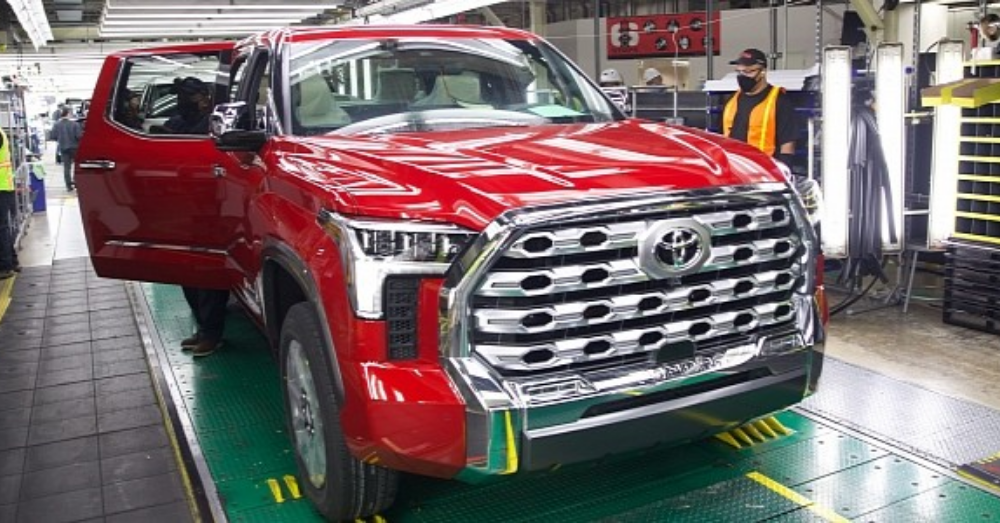 The new 2022 Tundra is heading off the production line and to dealerships around the country, and it’s a big deal. How big of a deal is this new version of the Tundra? It’s a big enough deal that it was unveiled recently in front of a group including Texas Governor Greg Abbott, Bexar County Judge Nelson Wolff, Mayor Ron Nirenberg, and several other dignitaries. If you don’t know who this group is, they are all political officials in the San Antonio, Texas area, where the latest version of the Tundra is being built.

The New Truck Shouldn’t Surprise Us

When you think of a hybrid powertrain, what vehicle and brand comes to mind? Typically, the first name you think of is the Toyota Prius. We all know what this small hybrid car has to offer. Now, a hybrid powertrain has been added to the Tundra to give us a truck that can drive on both electric and gasoline power to give you the driving range and fuel-sipping you’re looking for. While other automakers are trying to push fully-electric trucks, you could keep on driving in your hybrid Tundra.

The Entire 2022 Tundra Lineup has been Revamped

Toyota spent a lot of money redesigning and rebuilding the Toyota Tundra, which hasn’t been through a complete design in 15 years. In fact, the company spent $391 million on the production facility in San Antonio to build the new hybrid version of this truck, which is in such high demand that the team at this facility cannot build it fast enough. The total investment in the San Antonio area by Toyota now sits at more than $3 billion, making this city a hub for Toyota and a community supported by this company.

Those in Attendance Were Seriously Impressed

The dignitaries that attended the unveiling ceremony for the new Tundra witnessed a truck that will be a source of pride for the area. These trucks are being made to be better for the environment, be completely made in Texas by American workers, and be a truck that offers more power and capability than previously found in the Tundra models that did not have a hybrid powertrain. This is just another step in the climb to go green for Toyota, and it’s a big step with a truck that will continue to compete with the Detroit Big Three.

We Will See the 2022 Tundra Hybrid Models in the Spring

There are more than just hybrid versions of the Toyota Tundra being made at the San Antonio plant. Toyota has chosen to replace the 5.7-liter V8 engine with a 3.5-liter twin-turbocharged V6 engine as the standard power plant for this truck. Those being made with this powertrain, and not the iForce MAX hybrid powertrain, are being sent to dealers right now. The hybrid models will arrive in the spring and offer us a truck that saves fuel and gives us the power desired.

The base SR version of the Tundra that has the new V6 engine will make 348 horsepower and 405 lb.-ft. of torque. Higher trims will give you more at 389 horsepower and 479 lb.-ft. of torque. If you have one of the higher trims of this Toyota, you can tow 12,000 pounds and enjoy the payload of 1,940 pounds, giving you the towing and carrying capacity you need. You’ll have the option of either RWD or 4WD with this truck and enjoy cab and bed lengths that can make it the truck you need when you want to get things done.

The Toyota Tundra has been completely redesigned for the first time in a long time. This new model of the truck has a new coil-spiring rear suspension setup which gives it an improved ride, it offers a more modern interior area, and it now has an available 14.0-inch touchscreen for the infotainment system. Suffice it to say, this new version of the Tundra is pulling out all the stops and is ready to take on the big boys in the truck world. You just might want to take the Tundra home when you’re looking for a new truck to drive.

What Will the iForce Max Hybrid Powertrain Offer?

When the hybrid version of the Tundra makes its way to dealerships in the spring, this truck will be powered by a 3.5-liter twin-turbocharged V6 engine plus an electric motor-generator. Basically, Toyota took the new base engine and added an electric motor to the mix. You’ll find 437 horsepower and 583 lb.-ft. of torque when you see this truck. All versions of the Tundra will have a ten-speed automatic transmission to give you the shifting you need to get a lot of work done.

A New Build for this Amazing Truck

Toyota is the latest of the automakers to turn to an aluminum structure in the sheet metal used for the body and bed of a truck. For the Toyota Tundra, all models will have this composite material to give you the strength needed, the lightweight build required, and a tough truck bed that resists scratching and denting; it won’t rust, and it doesn’t need to be painted. Forget the Bedliner in the new Tundra; you don’t need it with this new build of the bed that has the right materials for you to handle all the work you need to do.

When you see the new hybrid versions of the Tundra at your local Toyota dealer, you’ll know that you’re seeing a truck that was made with pride in San Antonio, Texas. These trucks are the result of an incredible partnership of support from Toyota for this community. This means you can purchase a new version of the Tundra, drive it around where you need to go, and know that you’ve got the right truck for the job. Drive with pride, drive with confidence, and drive farther when you choose the hybrid Tundra in the spring.