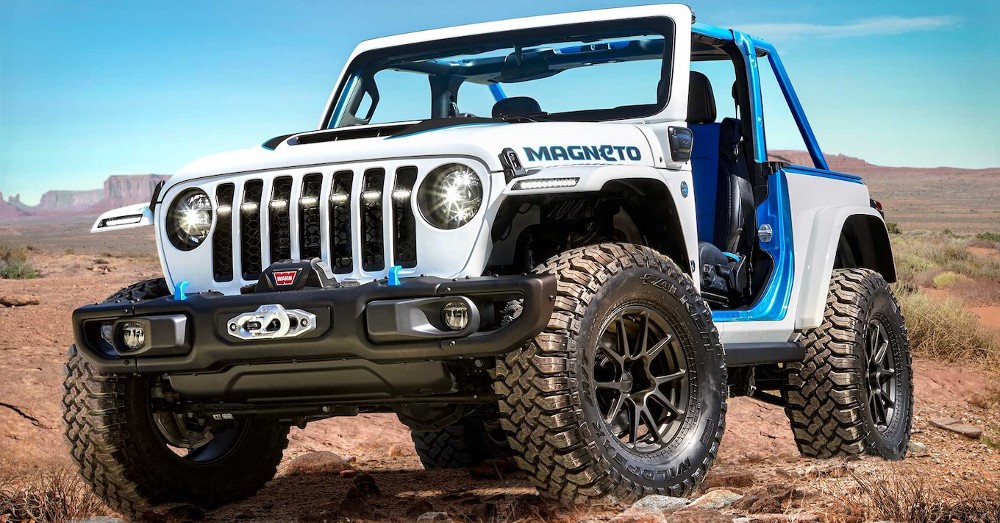 We’re just days away from the 2022 Easter Jeep Safari in Moab, Utah. They plan to introduce a whole slate of trail-taming 4x4s, but will the previously-teased Wrangler Magnet be among them?

A Trail of Teasers Leading to Moab

With the Easter Jeep Safari opening on April 9, Jeep has left a trail of breadcrumbs for fans to follow to their famed testing site. Earlier in the year, Jeep released teasers promising concept vehicles that are “bigger, better, greener, faster ultra-capable and undeniable.” They generated buzz with an image of the automaker’s Gladiator pickup in QR code with the Jeep Performance Parts logo appearing at the bottom. They also included a photo showing the front fascia of a Grand Cherokee filtered in “electric” blue with a statement heralding a “4xe electrified Jeep SUV that will certainly conquer even the most tumultuous terrain…and further highlight the Jeep brand’s vision of accomplishing Zero Emission Freedom.”

More teasers dropped in early March, only this time Jeep was less coy about hiding its identity. The automaker displayed an image showing the hood of a Wrangler or Gladiator with RUBICON clearly visible, followed by a superscript 20. Given that the Rubicon debuted in 2003—20 years ago—Jeep is very likely planning a 20th Anniversary Edition Wrangler Rubicon. The image contained another clue that has fans speculating about the powertrain in the 20th Anniversary Rubicon. Sharp eyes spotted a “392” on the hood, indicating that the Wrangler Rubicon may include the 392 Hemi engine.

At the beginning of the week, Jeep released “Trail Marker 5,” showing a Wrangler 4xe festooned with Jeep Performance Parts, including a rack roof (as opposed to a roof rack).And the latest breadcrumb, “Trail Marker 6,” appears to be another teaser of the much-anticipated all-electric 4×4 concept, the Wrangler Magneto. The stylized image distinctly shows “Magneto 20” along the side of the hood. Other than stating that they’re pushing the limits on “legendary Jeep 4×4 capability and off-road development even further,” Jeep doesn’t give much else away in the teaser.

This, of course, isn’t the first time we’ve seen the Magneto concept. Given what we’ve seen with earlier images and the recent Wrangler Rubicon teasers, it’s not unreasonable to get excited about seeing an electrified 2023 Wrangler Rubicon at a Jeep dealership near you.

Jeep hasn’t been shy about openly testing many concepts, including the Magneto, at its Moab site in order to gauge everything from performance to buyer excitement. It’s worth noting, however, that these teasers and the vehicles introduced at the Jeep Easter Safari event are concepts. The final design, features, and nameplates could change by the time they make it to your local Jeep dealership.

Hopping Down the Moab Trails

It’s not unlike Jeep to distribute concept vehicles at their Easter Jeep Safari events, like the Easter bunny hands out eggs. And with another seven concept vehicles teased already, the 2022 party in Moab is sure to deliver plenty to get excited about.