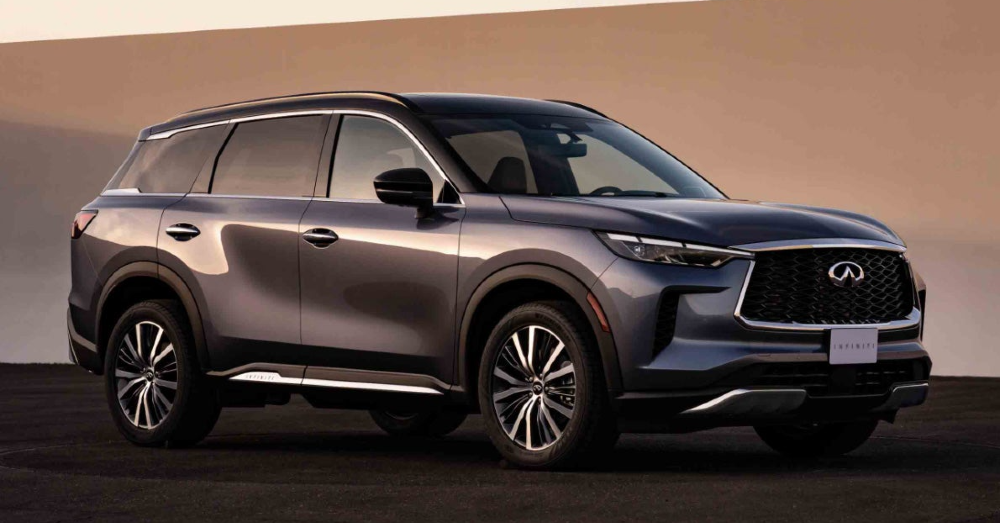 Why would we say that a new vehicle is possibly on the way? The next model for the Infiniti lineup could be the QX65, but what is this luxury SUV?

So far, we’re only in the infant stages of the potential for a new Infiniti SUV. So much so, that company representatives described the rumor of a new SUV as speculation. That said, some of the action taken makes it possible for the brand to expand the lineup and add another coupe-like crossover SUV to the mix.

What did Nissan do that could lead to a future SUV?

Nissan put in a trademark filing for the QX65 name recently. This application was entered into the US Patent and Trademark Office on December 26, but that’s only the beginning. Patents aren’t granted instantly; in fact, most take several months before they’re approved, even for large automakers. At this point in the process, filing this application is only enough to hold the naming position, allowing the Infiniti team to work toward a potential new model or simply hold the name while the patent is active. Everything else is still speculation.

Why would we care that Nissan filed a patent to protect their rights to the Infiniti QX65 name? A similar filing occurred a few years ago for the QX55 name, which then became the coupe-style crossover variant of the QX50. We’ve already seen the success of the QX55 with its sleeker style and impressive performance. Could the same happen for a coupe-like version of the QX60 SUV? It’s certainly possible for the brand to follow the same path. Coupe-style luxury crossover SUVs have become more popular, with more of them in the market than ever before.

The current QX60 is relatively new

Infiniti launched the second generation of the QX60 for 2022 and added a few extras to the mix for 2023. This crossover brings room for passengers across three rows of seats, acres of high-end materials, and the desired technology. This could become a very interesting conversation if the QX65 becomes a coupe-like version of the standard crossover. Would a coupe-style roof cut the headroom enough to delete the third-row seats? This is the question the Infiniti team will face as they move toward building this new crossover, that’s currently nothing more than a speculative venture.

What does the Infiniti QX60 offer?

If this luxury brand will make a coupe-like crossover from one of its current models, what should we expect? If the new Infiniti QX65 arrives during this generation of the QX60, it will likely share the platform. The QX60 delivers an impressive level of class, plenty of space, the desired tech, and more than enough standard equipment to make it easy to drive and enjoy. The QX60 is a safe SUV, earning the Top Safety Pick+ rating from the IIHS, which makes it a good choice for families on the move.

Did Infiniti add any new features?

The 2023 version of the QX60 includes wireless phone charging and a frameless rearview mirror. Both features are added as standard items for every trim level. This new luxury SUV also comes with three years/30,000 miles of complimentary scheduled maintenance to get your experience started on the right foot with this new SUV. If you choose one of the top three trims, you’ll enjoy bumpers finished in dark shades. These new items give owners a bit more for the QX60 and make us hope that they will cross to the QX65 if the new coupe-style crossover becomes a reality.

How much power does Infinity offer in the QX60?

All models of the 2023 QX60 share the same powertrain. This powertrain is comprised of a 3.5-liter V6 engine attached to a 9-speed automatic transmission. The power reaches 295 horsepower and 270 lb-ft of torque, and the fuel mileage returned is 21 city/26 hwy mpg for FWD models and 20 city/25 hwy mpg when AWD is added to the mix. If you’re looking for a hybrid powertrain for this luxury crossover, there isn’t one, which might seem a little odd with the proliferation of hybrid and electric vehicles entering the automotive market.

A coupe-style build could cut into the cabin space?

If the Infiniti QX65 becomes a reality, the roof will certainly cut into the overall cabin area of the current QX60. This might only impact the rearmost row of seats, but it could cut down on the headroom offered for the second row as well. The third row of the QX60 is only large enough for children, which might mean the lower roofline won’t impact this space too much in the coupe-like version. In the current model, the QX60 offers 14.5 cubic feet of cargo room behind the third row. Folding this row opens up 41.6 cubic feet of space, while 75.4 cubic feet are available to you if the two rear rows are folded down.

The adaptive front lights can make your night drives better

Whether you wait for the QX65 or choose the current QX60, the Autograph trim delivers a set of low-beam headlights that turn in the direction of the steering wheel. These lights are called adaptive front lights, and they light up the corner sooner than other lights, which means you could see an obstacle or animal on the roads much sooner than you would without these lights.

Are you ready to drive an Infiniti luxury crossover SUV?

It’s certainly interesting to discuss the possibility of a new Infiniti QX65 being a coupe-like SUV similar to the QX55. That said, if Infiniti is calling it nothing more than speculation, what are we to think? You might be better off driving home in a new QX60, which has three rows of seats, tons of Infiniti technology, and plenty of power. The QX60 is a reality and offered at your local Infiniti dealership for the 2023 model year, while the QX65 is still nothing but a rumor, but it’s a rumor we hope will become true.