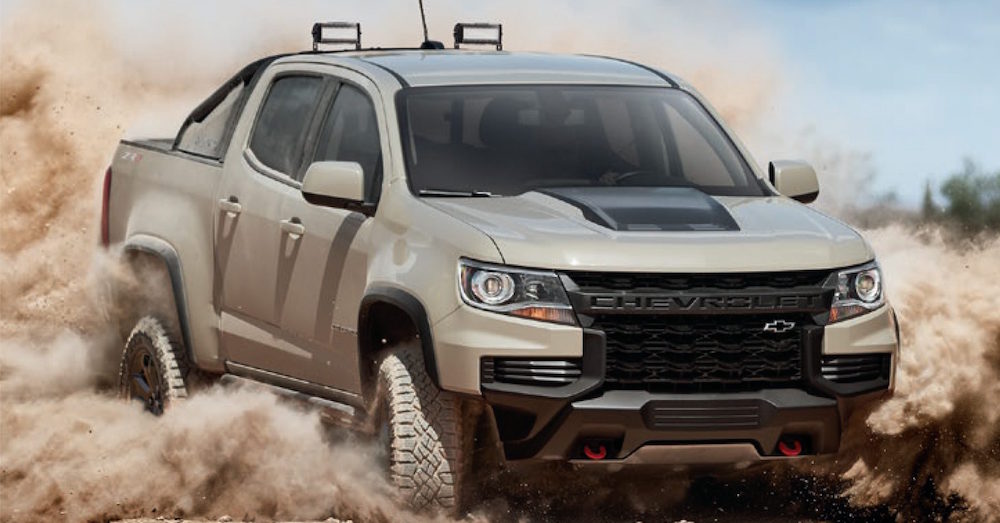 One of the toughest questions to answer might be which vehicle is the best in a class. Now, we’re trying to see if the Chevy Colorado is the best small truck ever.
In the current market, it is pretty easy to say that this truck is the one that tops the charts. While the Toyota Tacoma can boast up to 30 different configurations, the Colorado has the right number of trims, powertrains, and builds for you to have a truck that you’re sure to love to drive. This is one of the most well-rounded trucks you’re going to find, and it can be the right truck for you.

What Makes the Colorado So Popular?

There were a few years between the original version of this Chevy truck and the one we see now. The current model is ideal for nearly every type of driver. This truck is highly customizable, brings you excellent engine options, including the only diesel engine in the midsize truck segment, the towing numbers you need, and several off-road versions for you. You’ll love the smooth drive the Colorado gives you and know that you’ve got a truck that’s ideal for every driving challenge you face.

There are some trucks in the light-duty class with the Chevy Colorado that are built on crossover SUV platforms, and they feel and work like a crossover. The Colorado drives so nicely it feels like a crossover, but it certainly is not. You’ll admire the lack of noise entering the cabin and know that you’ve got a truck that can handle towing, hauling, carrying, and driving the way you want. Those other models that have a crossover platform aren’t nearly as capable as this impressive midsize Chevy.

Find the Character You Want in Your Truck

Let’s Get Into the Trims

There are four trims offered for the Chevy Colorado and a few packages that can add more to the model you want to drive. Here’s what to expect at each trim level:

Add More to the Mix

With the Chevy Colorado, you have a truck that’s an excellent foundation of what you want. You can add more to the mix with some of the packages offered. A new Trail Boss package is available for the 4WD versions of the LT and Z71 models. This package upgrades the appearance, adds skid plates, and gives you a one-inch front leveling kit.
There are other appearance packages offered across the range of trims. The Chrome Appearance package and a Redline Special Edition package for the LT trim, a Midnight Edition package for the Z71 and ZR2, and a Dusk Special Edition for the ZR2.
You can also have the Bison Edition of the ZR2, which takes the off-road capabilities of this truck to another level. This model is the result of a collaboration with American Expedition Ventures (AEV) to give you extra skid plates, a bolder appearance package, and special interior items.
All models except the WT can be upgraded with an 8-inch touchscreen, onboard navigation, and a Bose premium audio system. The LT and Z71 trims can be had with the Safety Package, which adds forward-collision alert and lane-departure warning.
With so many different ways to add items and upgrade this truck, you’ve got a lot to think about.

Have We Answered the Question?

Is the Chevy Colorado the best small truck ever? That is the question we started with, and it seems the answer is that it certainly is. If you want a version that’s affordable, basic, and ready to handle your daily driving challenges, the WT model is right for you. If you’re going the other direction and want serious off-road prowess, the ZR2 sits at that end of the spectrum. With two more trims between them, you’ll certainly find a version of the Colorado that’s right for you when you visit your nearby Chevy dealer today.