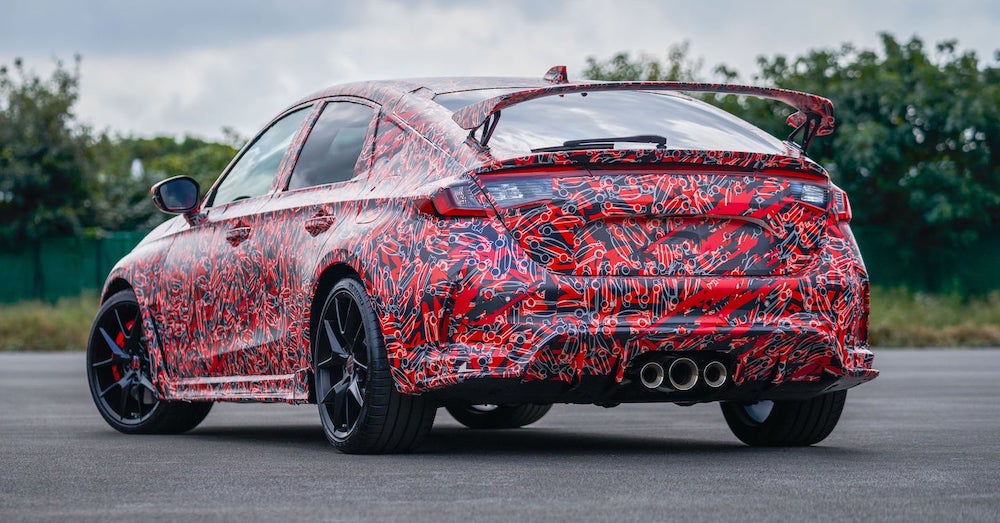 Honda has announced plans to reveal the 2023 Civic Type R at the Tokyo Auto Salon from January 14-16. But the automaker isn’t completely taking the wraps off of its sporty hatchback just yet.

What We Already Know

Prior to teasing photos of the Civic Type R, Honda had already made several announcements regarding the Honda Civic line. First, the automaker revealed that it was moving production of the Civic line to their Indiana factory after closing down their plant in Swindon, United Kingdom.

Honda also disclosed that the 11th generation Civic is based on a new, more rigid platform compared to previous generations. The updated platform will improve performance on the Type R and all other Civic models. And the Type R will continue to be offered as a hatchback only.

Although Honda plans to keep redesigned Type R under wraps, for now, newly released “testing photos” give us some hints about its design.

One of the first things we noticed (other than the low-key lighting) is Honda’s cheeky camouflage. Instead of the standard camo pattern many automakers use to conceal details about their cars, Honda designed theirs to show off the red “R” badge with outline drawings of the Type R hatchback design.

Another difference we see in the testing photos is a change in the size of the vents. The latest design appears more subtle, with smaller side vents embedded in the front and rear bumpers and a larger cool air intake grille up front. These aesthetic shifts don’t appear to take away from the Type R’s aggressively athletic design.

A couple of close-up images of Honda workers changing the tires on the Type R appear to indicate that Honda’s tire of choice is the Michelin Pilot 4S and that they’re sticking with the red Brembo front brakes. To accommodate the wider kicks, it looks like designers flared out the fenders—a design cue that’s even more apparent when viewing the Type R from the rear.

Honda has remained mum about the power plant in the Civic Type-R; we expect an upgrade from the old turbocharged two-liter inline-four that the automaker is retiring. That engine drove 306 horsepower with 295 pound-feet of torque, so while that’s enough to deliver some excitement to your morning commute, we won’t say no to a bump in performance.

However, MotorTrend reports that there is speculation that Honda could use a hybrid all-wheel drive system similar to the one in the Acura NSX. While such a setup would significantly increase the horsepower, the automaker has refused to comment on such rumors.

And performance purists, take heart: Honda will continue to offer a six-speed manual transmission in the Civic Type R.

So, When Will We Get to See It?

Fans are anxious to get a good look at the redesigned Honda Civic Type R. Even if they’re determined to keep the camouflage on it at the Tokyo Auto Salon, we’re hoping the automaker will take the wraps off a few more details in the coming weeks.