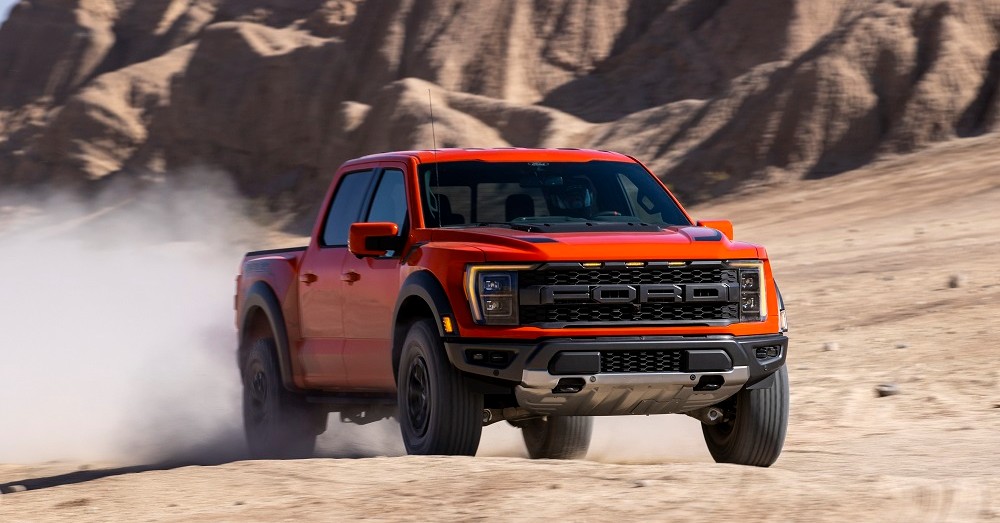 The rumors of a monstrous Ford truck are finally coming true. Later this fall, the order book will open for the new Ford F-150 Raptor R. If you thought the Raptor was something spectacular, get ready to have your mind blown. This massive truck, which will be street legal, is going to have more power than the Hellcat-powered Ram TRX. It doesn’t seem likely that Ford could put that much power into a half-ton truck, but that’s precisely what’s coming. Get ready for the Raptor that can destroy everything in its path.

Power is the Name of the Game

The current Raptor uses a 3.5-liter twin-turbocharged EcoBoost V6 engine that gives it respectable power at 450 horsepower and 510 lb.-ft. Of torque. Then Ram had to go and create the TRX with the Hellcat engine that pumps out 702 horsepower. This virtual nose-thumbing from Ram did enough to send Ford back to the lab to create the Raptor R.

This beast will bring power from the 5.2-liter supercharged flat plane-crank V8 engine found in the Mustang GT500. Its fitting the engine for the Raptor R is called the Predator because this truck is going hunting with the TRX squarely in its sites. Incidentally, the Raptor R is expected to pump out 750 horsepower; take that Ram.

Could the TRX Become Extinct?

The massive iron-block 6.2-liter V8 engine used for the Hellcat cars and the TRX truck could become extinct with increased compliance costs. This could easily put the 5.2-liter aluminum engine of the Ford F-150 Raptor R in the driver’s seat. Of course, when this new Raptor arrives, it’s going to be the most powerful of the half-ton trucks.

That is unless Ram somehow finds a way to increase the output of the Hellcat engine, something they have done with the Dodge Challenger in the past.

Why Does this Matter So Much?

Automakers have a lot of pride, especially when it comes to the high-performance products they create.

Ford has always been boisterous, proud, and cocky as they sit at the forefront of every new idea in the automotive world. Since the time of Henry Ford with the moving assembly line, this brand thinks they need to be on top of everything. Unfortunately for Ford, Ram has other ideas.

This new century opened, and only a few short years later, the Ram SRT-10 truck with a V10 engine was the talk of the street racing circuit. This just wouldn’t do, and Ford came back with the Baja 1000-inspired F-150 Raptor in 2010. Since that time, the game has been afoot.

There’s no way Ford is going to sit back and allow Ram to win accolades without doing anything about it.

When the TRX won MotorTrend Truck of the Year for 2021, Ford incited even more anger and focus than ever before. Unfortunately, the quick answer didn’t give us more power. The Raptor with the new 37-inch tire package is extremely impressive but not quite what we were looking for from Ford. This new package, which does require its own unique frame, offers superior ground clearance and better angles, but not more power. Where’s the power Ford?

It’s in the upcoming Ford F-150 Raptor R. This beast has the brawn to go with the brains that was the 37-inch tire package.
The Raptor R will be unmatched among desert runners, giving us more power, more speed, and more of everything we want in a specialized truck. This truck will put Ford back on top, and that is why it matters.

How Will the Raptor R Be Built?

The two new frames used by the F-150 Raptor will be used for the R version of this incredible truck. These frames feature a Ram-inspired coil-sprung rear suspension to give you better wheel articulation on the trails. Some upgrades will be offered, specifically to mount the larger V8 engine, but that’s to be expected. With more power and ground clearance than what you find in the Ram TRX, the new Ford Raptor R will be the king of the dirt roads, striking fear in the hearts of those that dare to cross its path.

Will the Raptor R Be Capable of Truck Stuff?

The new top-tier truck offered by Ford will use only one body style configuration. This body is the SuperCrew with a 5.5-foot bed in the rear.

This build gives you the size you need to take family and friends out for adventures to show off your incredible truck, but can it do truck stuff. The short answer is, yes, it can. We don’t know how the power of this new truck will translate to towing and carrying capabilities, but with the amount of power offered, this truck should be capable of towing the trailer you want to park at the campsite on the edge o the desert while you’re out tearing up the dunes.

The talk of power numbers from the engine, we can’t forget the item that pushes that power to the wheels, the transmission. The Ford F-150 Raptor R will likely have a variant of the ten-speed automatic transmission used in the regular Raptor. This is yet another place where the Ford is besting the Ram. The TRX has an eight-speed automatic transmission, which means the Ford has two more gears and likely better gearing for improved performance when you need it.

Will You be Ready for this Mean Beast?

In the production world, there simply isn’t anything quite like the Raptor R. This big and powerful truck is heading our way in a few short months; will you be ready?

Is this the truck you want to reserve when the books open? If you’re looking for a big truck with strong, honest, gasoline-fueled power, the new Ford F-150 Raptor R is the truck you’ll want to drive.

Once it arrives, it’s open season on those TRX models from Ram. Let the hunt begin.